Hey there Guys and Gals, and welcome to the last 2019 NASA Nor Cal season edition of TDR! Today we are focusing on the season closer for NASA Nor Cal that was held at the end of October, and the hell of a day we had at Sonoma with a great group of friends.

We weren’t completely sure if we were going to run this last weekend with NASA due to some personal life changes happening during that last week and a half of October, but as you can see… We made the event and had a hell of a time doing so! We met up with old time friend Fendi, the owner of the dark green 99 GT as well as Andrew and his good buddy Jeff who also has a pretty bad ass Fox.

We started off the morning by playing “musical cars” as we tried to find enough space for the four of us to unload and maintain camaraderie. After getting unloaded, and settled in the back near Simway Raceway, we cruised on over to the Driver’s Lounge for the drivers meeting to officially kick off the day. Roughly 40 minutes later we got set up for the first session of the day. Being that we had planned on giving a couple ride alongs to friends later in the day, we decided to test out the car during this first session and use this opportunity to try and set that new PB. Helmet on, laces tied, gloves slipped on and with velcro straps strapped it’s time to hit the Asphalt. Everyone else seemed very excited to get on track too, so we ended up getting stuck behind a plethora of cars. However that wasn’t a bad thing since that gave us the opportunity to open up the chopping blocks for the weekend and boy was the chopping block in full effect!

First session is a go and we get the Mare warmed up and adjusted to the ~20 minute session of abuse we are about to embark upon. The entire session we busted ass and went balls to the wall trying later braking zones and passing multiple cars in one clean swoop. One lap we missed the braking zone slightly and locked up the brakes a bit with another lap maintaining a drift out of 7A in addition to probably 10 cars getting chopped. With the 1st session done, and a solid 5 gallons of 101 used up, we returned to the pits and went to our driver’s download meeting. It wasn’t until later evaluation that we realized we had set a new PB of 1:54.936 and had a Theoretical lap of 1:54.419! To make this achievement even better, the lap where we drifted out of 7A WAS that 1:54.936 lap!

After setting that new PB we took the rest of the day easy and just enjoyed the track day out with friends. We didn’t forget to make sacrifices to the Chopping Block gods each session either as we still passed every car we came into contact with; whether it was a NA Miata, a 911 or the $115,000 FP350S, the car got chopped. Frank also covered a live video interview with a friend in the Mustang community where they talked about their respective builds and what led them to the current point in their builds; Frank gave a ride along to a friend who has been a supporter of FJD Performance since its conception and; Frank enjoyed the sound of car enthusiasts going WOT at Sonoma Raceway with his Mustang and track buddies.

The day wasn’t anything short of amazing and a hell of a way to close out the 2019 season with NASA Nor Cal. We all went home with our cars in tact and with our heads held high. Frank set a new PB, Andrew and Jeff moved up from group 3 to group 4 *cynical laugh* and Fendi moved up to group 3! Everyone is getting better and better and soon enough we will be competing in TT and soon after that ST. 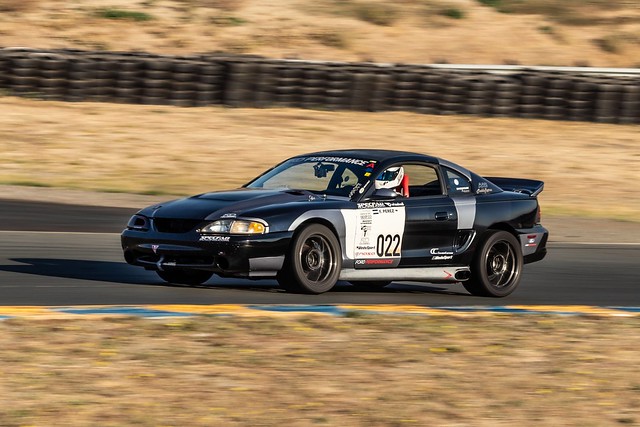 And a bunch of cars getting chopped